Tyson Fury’s next opponent Tom Schwarz’ crazy fight against Senad Gashi - BIZARRE DQ
Highlights of Tyson Fury’s next opponent Tom Schwarz’ bizarre fight against Senad Gashi. Schwarz won the bout via disqualification after numerous head butts from Gashi. After the result was announced both fighters carried on fighting and had to be separated. Fury fights Schwarz on June 15th, at the MGM Grand Garden Arena, Las Vegas, Nevada and will be promoted by Top Rank & Frank Warren now that Fury has signed a lucrative deal with ESPN. Subscribe to this channel for regular boxing videos and fights streamed live. https://twitter.com/BXNG_Enthusiast

Gashi vs Muhamed will take place at Universum Gym in Hamburg.

This fight won't receive much buzz in the boxing media but is a pretty good showdown for the hardcore fan.

The fighters' records are a combined 37-3 with 34 knockouts and the winner will gain momentum in the division and significant juice among German heavyweights.

Gashi, who is on a four-fight win streak, has stopped all of his foes inside the distance sans the 'name' opponents who have defeated him: Carlos Takam, Tom Schwarz, and Dereck Chisora.

Gashi vs Schwarz
On 21 April 2018, Gashi challenged then-unbeaten German Tom Schwarz for the latter's WBO Inter-Continental and Germany heavyweight titles. In a controversial bout, Gashi was disqualified in Round 6 due to several head-butts. Until then, the fight was purportedly even, as the smaller Gashi was proving his mettle.

Tip: The highlights from that fight are wild. 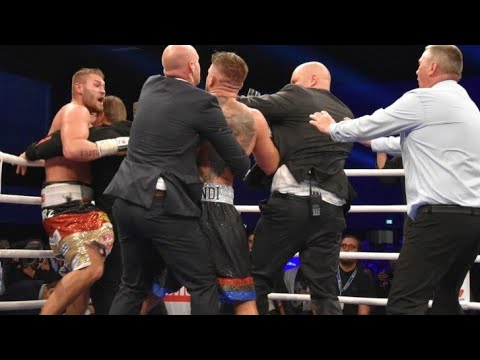 Gashi is disqualified against Schwarz

Schwarz, of course, would run his record to 24-0 before getting stopped in two by Tyson Fury in 2019.

Germany's top 10 heavyweights are as follows: